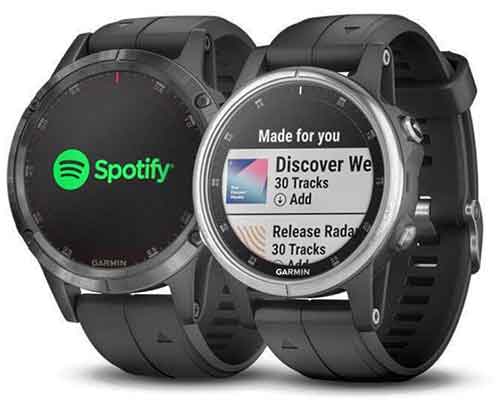 Garmin announced a partnership today (4th October 2018) that will excite its users who rely on Spotify for music. Those with Garmin Fenix 5 Plus devices can now download the new Spotify app from Garmin's Connect IQ app store. The app brings Spotify integration to the Fenix 5 Plus series, allowing users to download playlists for offline listening.

The Fenix 5 Plus series contains the newest Fenix devices, which are some of Garmin's most expensive wearables, starting at $899 for a Fenix 5. Music storage is a standard feature on all Fenix 5 Plus models, but users were previously limited to downloading personal tracks or playlists from iHeartRadio or Deezer if they are paid subscribers.

Now, Spotify joins the music sources available on the Fenix 5 Plus series with its own mobile app. When connected to Wi-Fi, premium Spotify subscribers can download playlists to a Fenix 5 Plus watch so they can listen to music without their smartphone nearby. Users  will be able to  download tracks for offline listening using Bluetooth headphones connected to their smartwatch.