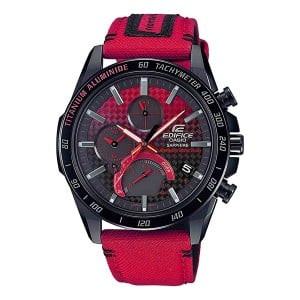 Honda Racing, which supplies the power units for the Scuderia Toro Rosso Formula 1 team, and EDIFICE are Japanese brands that are constantly meeting the challenges of motor sports on a global scale. Both brands are very much a part of the Formula 1 world-class racing scene, and these new collaboration models were developed in cooperation with the HRD Sakura R&D facility, which develops Honda automotive motorsports technology.

The bezel of the EQB-1000HRS is the first in the EDIFICE lineup to be made of titanium alminide, which is the same material used for the engine valves that are vital components of the Honda Formula 1 power unit. The surface of the EQB-1000HRS bezel is done to the same type of finish as Honda Formula 1 power unit engine valves. The result is a chronograph that is literally equipped with Honda Racing equivalent parts.

Valves must be able to withstand the force of incessant explosions inside the combustion chambers of the engine. At the same time, they must balance the needs of heat resistance, hardness, and low inertia weight in order to achieve the reciprocating motion that at times can reach speeds of more than 100 times per second. Titanium alminide not only makes this possible, its light weight and durability also make it optimal for a quality timepiece such as EDIFICE. The same diamond-like carbon (DLC) coating that is applied to harden the interior of the combustion chamber of a Honda Formula 1 engine and protect it from wear is also used for the bezel of the EQB-1000HRS, providing it with a highly scratch-resistant finish. The nylon band of this model has Kevlar® inserts, and its red coloring matches that of the Honda Racing identity colouring*.

EQB-1000HRS features red and black gradations on their faces to capture the image of the instant that a spark ignites the fuel inside an engine cylinder.

The base model of this new timepieces is the high-spec, slim EQB-1000 chronograph. Bluetooth® Smartphone Link, a Tough Solar power system that enables charging even by exposure to fluorescent light, and chronograph timekeeping all come packed into a configuration that is a mere 8.9 mm thin. The result is an amazingly powerful timepiece that is thinner and lighter, and that provides a more comfortable fit to the wrist.

Phone Linking enables a host of useful motorsports features and functions, including highly accurate timekeeping, simple selection from among 300 World Time cities, transfer of 200 lap time records from the watch to the phone, recording of times in units of 1/1000 of a second, and more. Formula 1 races are conducted under strict rules of session punctuality while facing unpredictable conditions that include inclement weather, crashes, and more. Time is literally of the essence and needs to be managed with seconds-level precision, so teams are constantly fighting the clock to avoid penalties incurred if mechanics exceed the allotted time on the grid at the beginning of a race. World Time capabilities are also essential because Honda Racing Formula 1 engineers need to take part in 21 races around the globe while maintaining contact with their R&D team in Japan.

This new limited-edition model was developed through close cooperation between EDIFICE and Honda Racing.

* DuPont™ and Kevlar® are trademarks or registered trademarks of E.I. du Pont de Nemours and Company.

All prices are in NZ Dollars and include GST. For orders dispatched overseas the Ex Tax Price will be used once you have entered your shipping address.

Stockholding will vary between stores. If you are browsing on a desktop, then in the category for the item you are interested in, you will see the stores that stock this brand and their location. This is not available on a mobile.  If you intend to travel to a store it is to your advantage to phone the store first to make sure that the item is in stock first.

Alternatively you can message us via the chat link at the bottom right of the page and we can check for you.

The pricing shown on this web site may differ from in store. RRP is the manufacturers recommended price and our normal price in store. If the RRP is crossed out but not on SALE the lower price represents our normal "online only"  pricing.

Items marked as SALE and items on our Specials page reflect various promotions where the price is lower than RRP or our normal online price and these are for a limit time. SALE items may be available in store but may not be available at all our stores. They are available online though. Quantities will be limited.

If you want to purchase a SALE item in store then its best to confirm availability first before travelling to your nearest store.

The price you accept on payment is the fixed price. Prices can vary after purchase due to various factors such as the NZ dollar, Supplier costs or promotional pricing. If the price increases after purchase we will not ask for the extra amount and vice versa if the price drops there will be no refund of the difference.

This product qualifies for Free Shipping
Christies will pay for Free Delivery in New Zealand via Signature Required Couriers on all orders over $45.